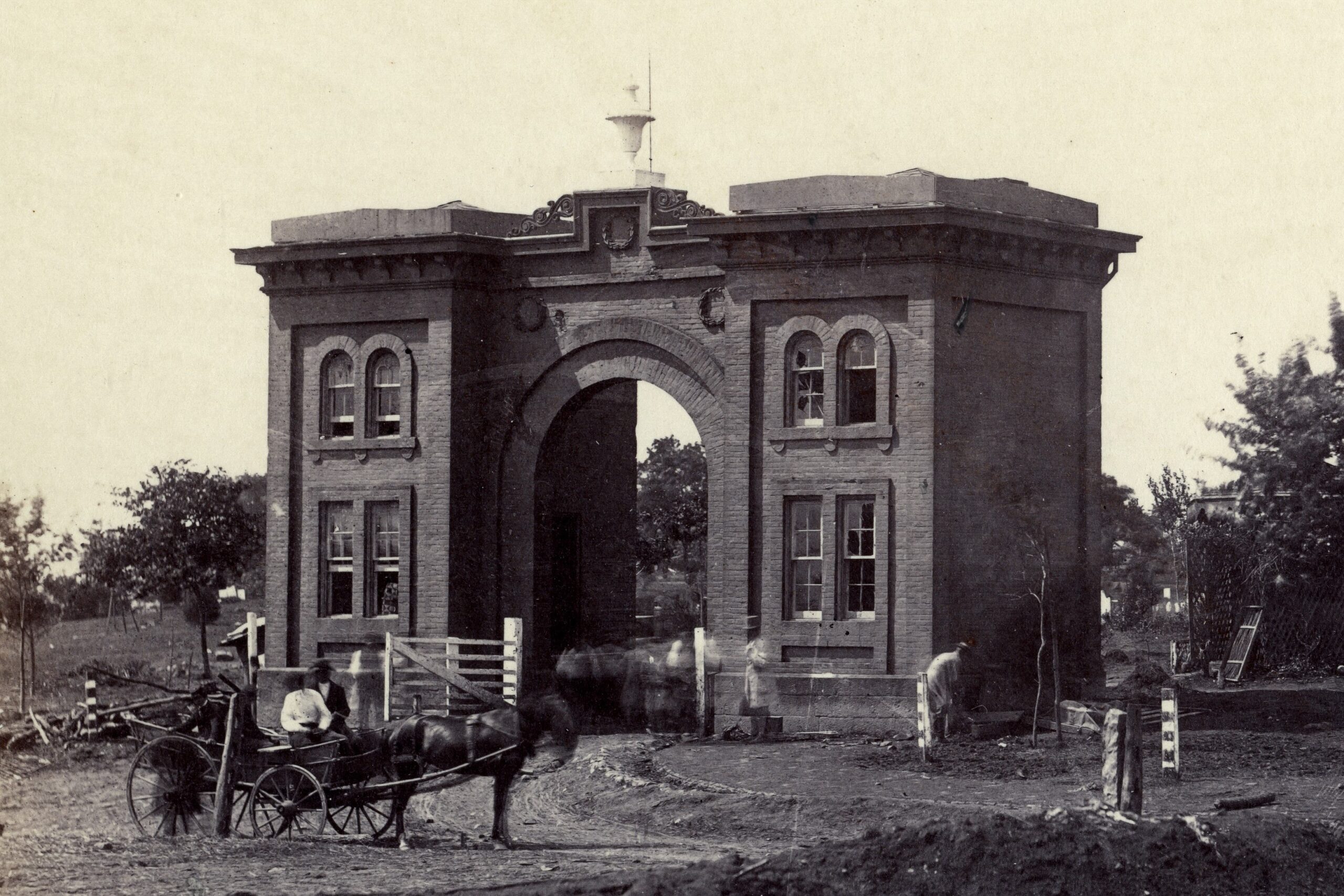 In the 1830’s a rural cemetery movement began in the United States, paralleling Europe’s creation of cemeteries on the outskirts of cities and towns. The first garden cemetery established in America was Mount Auburn Cemetery in the adjoining towns of Watertown and Cambridge, Massachusetts. Created in 1831, Mount Auburn would set the trend for northeastern United States cemeteries. The entire concept differed from the church graveyards typically found in the cities. Landscaped with gardens, trees, ornate sculpture and avenues, cemeteries would help to create an environment for reflection, rest and even recreation.

In November, 1853, prominent citizens of Gettysburg met with the intent to create a cemetery for Gettysburg. Attorney David McConaughy organized the committee that agreed to purchase the first hill on the western side of the Baltimore Pike. The name Ever Green was adopted and the Ever Green Cemetery Association was officially established in April, 1854. The name Ever Green was eventually changed to Evergreen though cemetery minutes do not specify an official act to do so. Consistent use of “Evergreen” began to surface in the cemetery’s minutes between 1880 and 1881.
The original board of managers of the Evergreen Cemetery Association could be regarded as the most distinguished board in the history of Adams County. Among those serving on the board were Charles P. Krauth, Pennsylvania College’s first president; Reverend Samuel S. Schmucker, founder of the Lutheran Seminary and Pennsylvania College; Michael Jacobs, Professor of Science and Mathematics at Pennsylvania College and Henry J. Stahle, editor of the Gettysburg Compiler newspaper. David McConaughy served as president of the association from 1854-1864.

In August, 1854, rural architect James Belden laid off the grounds for burial and on November 1, 1854, Mary Beitler was interred becoming the first citizen to be buried at Evergreen Cemetery. A public opening was held six days later and work began on beautifying the cemetery with the planting of trees, some which would live through the 1980’s. The last of the original trees to be taken down at the cemetery was a spruce tree next to the gravesite of James Gettys, founder of Gettysburg. The tree was hit by lightning in July of 1996 and removed later that year. Though no witness trees to the battle remain at Evergreen, a large boxwood planted in the 1850’s on the north side of the Gatehouse still survives.

On September 1, 1855, the cornerstone was laid for the Evergreen Cemetery Gatehouse, the same day Peter and Elizabeth Thorn were married. The Thorns, who both emigrated from Germany, moved into the Gatehouse in February, 1856 after Peter was hired as the first caretaker of the cemetery for an annual salary of one hundred and fifty dollars. Unlike many of Gettysburg’s notable historic buildings, the Gatehouse, to this day, is still used for its original purpose: to house the caretaker of the cemetery.

The managers of Evergreen Cemetery decided to grace the entranceway to the cemetery with a unique form of architecture for a small town cemetery. Philadelphia architect, Stephen Button gave Gettysburg its first example of funerary style architecture as the Gatehouse was built to represent the gates of heaven. The Italianate structure’s brick and stonework were painted burgundy and the cornice a dark chocolate brown. Included on the building were wreaths painted green and a white urn. Built for a cost of $1,025.00, the Gatehouse would eight years later become the most identifiable architectural landmark from the Battle of Gettysburg. The structure has yet to be painted by any of the notable Civil War illustrators using the correct color scheme from July, 1863.

Upon his hiring as caretaker, Peter Thorn assumed the duties of mowing the grounds, digging all graves and arranging removals from other cemeteries. In exchange, he and his family could occupy the gatehouse free of rent. (Still to this day, a benefit given to the caretaker.) Peter and Elizabeth lived at the gatehouse with Elizabeth’s parents, John and Catherine Masser. The Thorns lived in the northern section and the Massers in the southern half, with the first floor used as the cemetery office. Each side consisted of three rooms: a cellar, living room (office in southern half) and a bedroom. Contrary to belief, a passageway never existed from one side of the archway to the other.

On August 16, 1862, Peter joined the 138th Pennsylvania Infantry. He served for approximately three years in the Union Army and left Elizabeth, with the help of her father, in charge of the cemetery. Arguably, Elizabeth Thorn held one of the most important positions of any woman in the town of Gettysburg. Fortunately, Elizabeth had her parents available to help raise her three sons; Fred, George, and John while she attended to her duties. Through June, 1863, Elizabeth averaged five burials per month.

On the night of July 1, 1863, Elizabeth fed Generals Sickles, Slocum and Howard in the living room of the gatehouse. Within four hours, she was ordered by General Howard to leave the gatehouse with her family and eventually returned four days later to her home. On July 6, 1863, Sgt. Maj. Charles Letford of the 29th Pennsylvania Volunteers became the first soldier from the Battle of Gettysburg to be buried in Evergreen Cemetery. Elizabeth, with the help of her elderly father, buried the first 91 soldiers from the battle in the rockiest region of the cemetery.

Although Elizabeth Thorn endured problems shared by many of Gettysburg’s women, the added burden that was placed upon her makes hers one of the most remarkable civilian experiences during and following the battle. On November 1, 1863, her child was born and named Rose Meade in honor of the commander of the Army of the Potomac. Peter Thorn was discharged from service on June 23, 1865 and returned to his duties as superintendent at Evergreen until he resigned in 1875.

After the battle, there was a pressing need to establish another cemetery in Gettysburg for the burial of soldiers killed from the battle. That process would involve two separate concepts from two bitter rivals.

In 1862, after two native sons of Gettysburg had been killed in separate battles and buried in Evergreen (Nesbitt Baugher and Frederick Huber), David McConaughy proposed the first concept of a soldiers’ cemetery at Gettysburg. McConaughy’s letter to the editor, entitled “Honor our Heroic Dead”, appeared in the Adams Sentinel on June 24, 1862. The following excerpt validates his concept:

Let there be a selection made of an eligible site and commodious ground in Ever Green Cemetery, and in the center let there be erected a handsome and imposing shaft of marble, around which shall be interred the remains, and upon which shall be inscribed the names of all the glorious dead, native to, or citizens of, our Country, who die in the defense of the nation in this momentous struggle. Let each grave be indicated by a small headstone. Upon the Monument should be inscribed the names alike of privates and of officers, without any other distinction whatever, save the simple yet eloquent record of the names and battle-fields of our martyred dead.

Wills, however, continued to question McConaughy’s motives. When McConaughy purchased land on East Cemetery Hill for the purpose of preservation, Wills claimed McConaughy was purchasing the land with the hopes of charging admission to view the historic battleground.

I think the whole project is visionary and impracticable… and knowing him as well as I do (and probably you know his character also) I cannot fail to draw the conclusion that he originated the project and is endeavoring to carry it out for a selfish and mercenary purpose. If he succeeds in it I fear the public will be deceived, and I know that there will be unpleasant and probably severe restrictions upon visitors to the positions of the battlefield which he may thus control…

This time, Wills’ plan to foil the efforts of McConaughy failed. McConaughy, with the help of several prominent citizens, organized the Gettysburg Battlefield Memorial Association in April, 1864. He served the organization for ten years, and despite Wills’ claim, never profited from the land intended for preservation.

David McConaughy’s foresight was equaled by few, if any, during his day. He helped to establish the Evergreen Cemetery, lobbied for a soldier’s cemetery a year before the Battle of Gettysburg and immediately understood the importance of battlefield preservation. David Wills’ invitation to President Lincoln to speak at the dedication of the Soldiers’ Cemetery on November 19, 1863 would forever change Gettysburg’s historical prominence. By asking President Abraham Lincoln “to make a few appropriate remarks” in his letter to the president, Wills inadvertently helped to shape the greatest speech in American history.